It was my first class for this new semester. I am assisting Mr. Amin to teach Study Skills to our new students.

They were the eldest last year in primary school. They had their UPSR. This year they become the youngest in secondary school. No more UPSR. And on top of everything, our school is not an ordinary school. Switching from a teacher centered classroom to a more progressive student centered classroom, we need to assist our students on transforming themselves into active learners, who take charge of their own learning, more than simply staying as the passive knowledge receivers, not even to be known as learners in its true sense.

So, starting from this year, we introduce Study Skills as a specific subject intended to help these new students. I teach two classes on this subject, assisting Mr. Amin who also teaches History 1 and History 2 for Year 2 students. 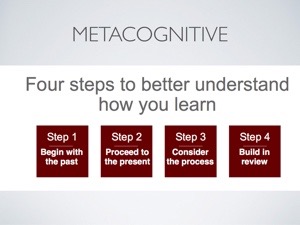 “We all have different way to study. Some prefer a quiet place. Some can study effectively while listening to music. Do you know how you studied before?” I asked my students.

They shared many answers. We even identified that while answering the question, some of them were playing with pen, scissors, rocking the chairs and standing eagerly waiting his turn to answer.

“See, so many stories, each of them is interesting. Which part of studying you don’t like the most?” I continued.

“Memorising. So many things to memorise!” it seems like everyone agreed on this.

“Is there any way that you created to assist you on remembering facts? Anyone heard of mnemonics?” I asked.

“When I was at your age, I also created my personal mnemonic that I use until today. Do you ever got confused when to use C and when to use S in words such as ‘license’, ‘practice’, ‘advise’ and so on?” I asked.

“Yes. One is verb and one is noun” one of them responded.

“Which one is which?” I tried to confuse them.

“Errr… I am not sure” the boy replied.

“Aha, here is where mnemonic can be really helpful. I invented for myself the term “SLEEPING CAT. As you can see, sleeping is a verb and cat is a noun. So S is for verb and C is for noun” I explained it to them.

They’re all laughed excitedly. Now they can see by having some skills, learning can be fun, easier, and SPECIAL! I promised them that we will have a specific class to explore more on mnemonic. They should prepare some. At this stage, I managed to make the lesson relevant to them. 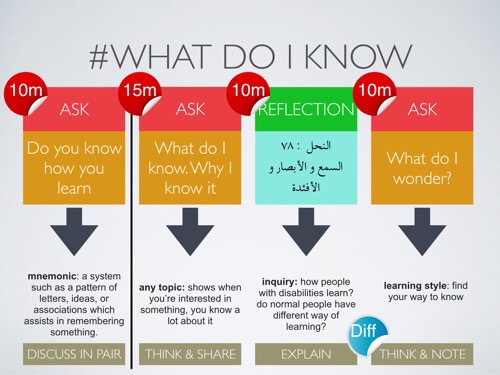 “What do you know?” I asked them a simple question.

In a student centered classroom, we want to make the learning as relevant as possible. We want our students to have the habit of reflecting their current knowledge, and how our classroom can assist them on expanding their knowledge based on what they already know. One of the methods is by checking their current knowledge. As for this class, I also hope to help themselves expressing whatever they think of feel, without any fear of being judged or whatsoever.

“Now, think of something you really love. Something that you can spend like the whole day talking about it. Something you Google to know more, to see more. Something that you feel proud of knowing it more than others. That you even want to show off and champion yourself as the one who knows the most. It could be a movie, a sport, an artist, an object…” I tried to help them imagining their ‘knowing’.

Some already laughed. Maybe it is something so silly or embarrassing.

“Ok now, work in pair. Tell your partner the subject you love the most. And let him know at least three things about it that fascinate you. I give you five minutes” I initiated an active learning through the simple discussion.

“Ustaz, you want us to tell our own answer or our partner’s answer?” one of the students asked me.

Aha… This boy will get two extra marks in his Class Dojo for being proactive. I value proactive at high price.

“I want you to share your partner’s interest” I replied.

By doing this, an active student can help his more passive partner to participate. It helps them to listen and understand better.

When the students were busy with the activity, this is the time for personalised learning. I attended some passive students asking them how they are, what can I do to help them, make them feel secured, safe and comfortable being in my classroom. I identified some students that I think will need more personal engagement outside the classroom. I took note on this matter.

“Okay, any volunteer for us to begin with?” I asked.

One of the students raised his hand saying his partner loves aircraft. He loves the fact that one day he can bring his parents on an airplane free of charge.

“He loves aircraft, as a pilot or a steward or an aircraft engineer?” I showed my interest in his story. He wanted to answer on behalf of his partner but the student replied by himself.

“Anything. Anything related to aircraft, ustaz” he said, firmly.

“Do you have any specific model that you like the most?” I asked.

Wow, this guy knows even the nickname.

“La samahallah, do you know any accident involving Airbus A380?” I tried to dig even deeper.

“Yes. Qantas Airways lost its engine and dropped it from the sky in Indonesia” he explained.

I am now even more impressed. This boy watches Air Crash Investigation a lot. Like me, haha.

After that, more students shared the stories of their partners. Chess, Minecraft, Spiderman… Many things.

I took the opportunity to integrate some other subjects into the classroom.

“What is chess in Arabic?” I asked.

Nobody knows. I offered them a quick answer. It is shatranj (شطرنج).

“How to say Spiderman in Arabic?” I asked another question.

No one knows the answer.

“Why don’t we ask Google? Do not use Google translator. Try to type your question in the search box. I want to show you how amazing Google can be. I typed “how to say spiderman in Arabic” I suggested.

It’s amazing. Google understands your question! We tried several other ways like currency convertor and calculator. Students were very excited to figure out how Google can respond to them in many ways they never knew before. My aim is to give them the chance to taste the sweetness of knowing and discovering new knowledge.

I concluded the session saying that these students do know a lot of things. But they do not realise that all these knowledge have learning values. We can use them in many ways and I don’t want them to stop expanding those knowledge. They have passion on them. That is the most important element to motivate them, the passion.

It is amazing to reflect on their current knowledge. Now, if anyone wants to know more about Minecraft, should go to the right person who is the most knowledgable on mining, building, burning and making things crazy with bricks.

Do you realise that we started at the same point in this life? We were born knowing nothing. Now we know many things. I integrate a Quranic verse from surah al-Nahl verse 78, when Allah says:

“Allah was the One who brought you out from your mother’s womb, you do not know anything. And He made for you the hearing, the seeings and the thinkings, so that you may be thankful” [al-Nahl 16: 78]

Now we know many things.

How did that happen?

What do we use to know?

We use our hearing. We use our seeings. We think!

“Why in the verse, hearing is singular, seeings and thinkings are in plural?” I asked them.

“We can only listen one thing at one time” one student replied.

“Exactly! We can only listen to one thing at one time. But we can see many things and thinking about many things together simultaneously. Do you see how unique is Allah’s words in the Quran?” I was happy to see their level of inquiry increased.

“Why someone who is deaf, is also mute?” my student asked.

“Interesting. Thank you, son! We say what we heard. If we are deaf and never heard of the pronunciation, we have difficulties in saying it.” I responded.

“If the person had normal hearing during his childhood and then he became deaf, will he becomes mute as well?” he asked again.

The boy was quite in bad mood at the beginning of the class but now he caught something he is interested in.

“His speech will be better as compared to someone who is deaf and mute right from birth. But I think maybe the speech will decrease from time to time. You should find out more and share with us what you found” I suggested.

He looked engaged in a deeper thought.

I concluded the reflection segment by in inviting them to express their Shukr (gratitude) that Allah granted us with full capacities as learners. Let us make use of our hearing, our seeing and our thinking to learn and know more.

I asked them to fill the form I gave by thinking of one subject that they do not know yet, but eagerly want to know, write down some new things they learned from today’s classroom and write a suitable title for today’s lesson. They should send the form to my room by 1230 tomorrow.

Class ended slightly 5 minutes late. We cleaned up the classroom. Make sure all the tables and chairs are in order and class dismissed.

It was a pleasant 50 minutes.

May Allah shower my students with knowledge and wisdom with hearts full of love and happiness, ameen.

1 Comments on “Metacognition: Learning How You Learn”