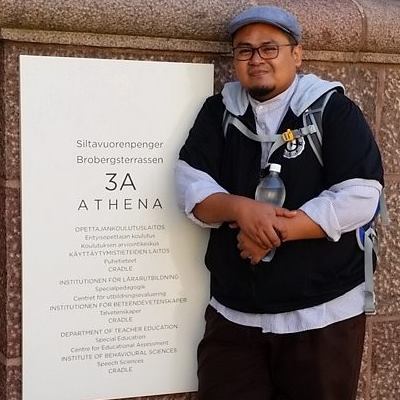 Searching the best education system has a long historical background, highlighted by what Marc-Antoine Jullien de Paris (1775-1848) presented in his Esquisse (A Sketch and Preliminary View of a Work on Comparative Education. It was first published anonymously in a Swiss journal, Bibliotheque Universelle des Sciences, Belles Lettres et Arts (Geneva) in 1816 [i]. Under similar climate of exploring the modern paradigm of education, ????? Rifa’a al-Tahtawi (1801-1873) also compared the French education as a model of Western education and what he had in his country, Egypt [ii].

These purposes of comparing education system from one country with another are now commonly presented by PISA (Programme for International Student Assessment) and TIMSS (Trends in International Mathematics and Science Study). Both had been widely used to measure the performance of a country in different core aspects of education as compared to other participating countries. The objectivity of this global survey is now being criticized by many, which lead to the question on its validity to compare one education system with another. For example, we learn from the prominent Chinese author, Yong Zhao in his recent Global Search interview, he claimed that his research indicates that PISA rankings have a significant negative correlation with entrepreneurial qualities [iii]. Gerard Kelly in his article suggested that Pisa has two big problems, according to its critics. The first is highly technical: the statistical model the OECD uses isn’t fit for purpose. The second is more comprehensible: different students in different countries weren’t asked the same questions. Indeed, it seems that more than half the teenagers taking part in Pisa in 2006 were not tested on any reading questions whatsoever, which didn’t stop the OECD giving them a score [iv]!

Therefore, the most important question remained unsolved. What is the best education system?

FROM MALAYSIA TO FINLAND

PISA has put Malaysia and Finland into the two extreme edges of the result. In 2012, Malaysian students have scored below the global average. Currently, Malaysian students are at the bottom one-third among more than 70 countries in international assessments like Timms (Trends in International Mathe­mathics and Science Studies) and Pisa. 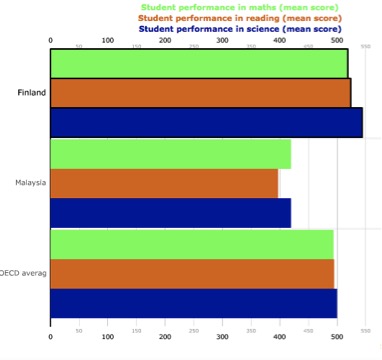 The Malaysia Education Blueprint has set the goal for Malaysia to be in the top third of countries participating in Pisa and Timms by 2025, but will that lead Malaysia to have its best education system?

The University of Helsinki in Summer 2015 offered a course under the Department of Teacher Education titled, “Understanding Finnish Education: From Myths to Realities”. The course is intended to critically analyze Finnish education together with collective perspective on the best education system as perceived by the participants from many different countries. I participated in this program to broad my academic perspective on my current work in Ottoman History related to the theory of knowledge, but must importantly, on behalf of the school where I serve as the academic director, in search for the best education system with Finland as the mirror.

Describing an education system is a systemic task. Not as simple as it sound, one might confused when he or she got deeper into the process of change, when change is concerned. Therefore, we need some sense of what to expect and which direction to take. I would divide my explanation based on the suggestion presented by Beverly L. Anderson [v]. It includes six stages of change as follow:

A visionary system for education is centralized on certain principles and not easily influenced by different stakeholders. The best education system serves its main client and that is the students themselves. The entire components of the system must uphold the shared vision to empower students as individuals. Finland has demonstrate a good example on how the commitment to the shared vision abstains the education system to be distracted by regional and global reforms such as the standardization of education, increasing focus on literacy and numeracy and consequential accountability systems for schools [vi]. Finland maintain its commitment to increase the student learning, which remains the most fundamental subject that an education system serves.

The best education system does not only communicate the public at the informing level but it has to be taken into the highest level of participation. The involvement of the public in the interest of students and their education requires an efficient level of decentralization, as promoted by UNESCO, the World Bank, and other multilateral and bilateral assistance agencies for a number of years [vii]. One of the key legislative successes of Finnish education is the decentralization policy [viii]. The decentralization, be it deconcentration, delegation or devolution, helps to position politics and politicians in serving education, and not the other way round.

The best education system defines network as part of the professional capital, together with human capital and decisional capital [ix]. It as seen as insignificant but the 21st century education requires teachers to have the access to local, regional and global network to develop a more resourceful perspective and support. The network as the social capital refers to how the quantity and quality of interactions and social relationships among people affects their access to knowledge and information; their senses of expectation, obligation, and trust; and how far they are likely to adhere to the same norms and codes of behavior.

The best education system empowers teaching and learning at its best. Teachers have to achieve competency as being educationists in the sense that they move from acting as the content delivers into reflective pedagogical professionals. Finland transforms the teacher education by upgrading the basic requirement for service entry of having masters degree for all teachers in all school levels with the exception of preschool. The main idea is not to produce researchers, but to ensure teachers are reflective and have the capability to articulate the surrounding, the practice and the changes in a methodological manner [x]. This also requires the classroom to be transferred from the traditional setting of teacher centered perennialistic or essentialistic classroom into a more progressive learner centered classroom, which will offer the teachers more room for observation, reflection and research.

Administrative roles and responsibilities in the best education system must be position is delivering service by encouraging rethinking, improvement, and innovation, away from unnecessary bureaucracy. If Malaysia is taken as an example, we know that the roles and functions of the District Education Officers (DEOs) are mainly supervisory, managing information, and carrying out routine tasks. But how effective are the DEOs in carrying out their duties? Research on this question indicates that that the DEOs tend to spend more time handling administrative matters than professional matters [xi].

All level of policy, must to be aligned around the beliefs and practices of the new system, particularly in areas related to curriculum frameworks, instructional methods and materials, student assessment practices, resource allocation, and the inclusion of all types of students [xii]. The harmony in policies will ensure a clear direction with minimum supervision based on the culture of trust which would be considered as the most unusual but real factor behind the excellent quality of Finnish education.

The best education system is concentrating on human elements rather than numbers. Peter Gray once said:

Most problems in life cannot be solved with formulae or memorised answers of the type learnt in school. They require the judgement, wisdom and creative ability that come from life experiences. For children, those experiences are embedded in play[xiii].

1 Comments on “THE BEST EDUCATION SYSTEM IN THE WORLD? MYTHS AND REALITIES”