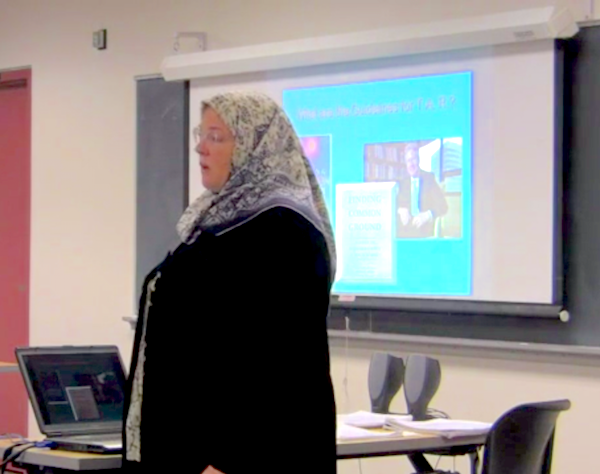 The lecture given by Sister Susan Doughlas introduced me to a very important civic framework which is timely and critically needed. Taking religion as real, important and nevertheless relevant in this public square modern life, she has summarized many important guidelines for teaching of comparative religions. Making use of what is stated in the Constitution, the framework also includes two materials suggested; Finding Common Ground. A Guide to Religious Liberty in Public Schools and Taking Religion Seriously Across Curriculum, both by Charles Haynes and co-authors.

Teaching other faiths in public education, is a huge gap in our country; be it the public schools, or private and Islamic schools. Even though Muslims, Buddhists, Hindus, Sikhs, Christians and members of some other minor faiths are living together,  we do not know each other and tension between faiths is easily occurred. I like what Len Traubman said in the Youtube video “How to communicate in times of conflict”. He said, “We can do what the government can’t. Governments write treatise and enforce treatise. But we as the member of the community are building human relationship.” Therefore, to make use of the education is our beacon of hope. I believe many want to do it, but without a proper framework, the efforts in many ways trapped in conflicts and distanced from the objectives. 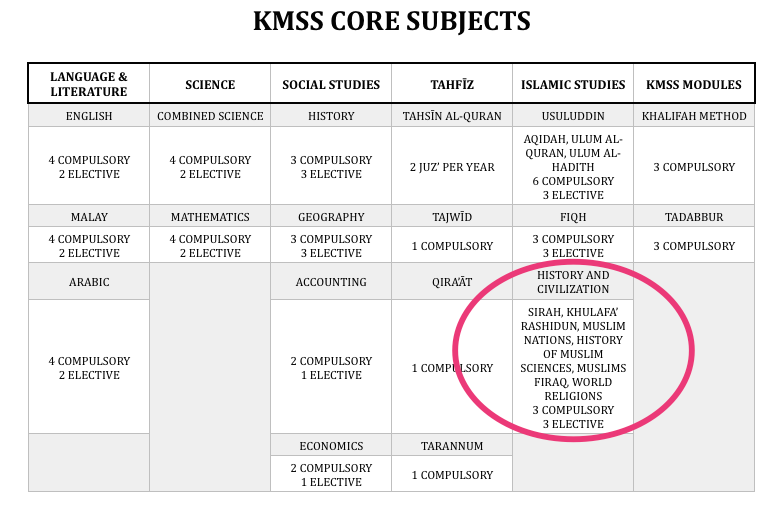 In our school, we have World Religions as an elective subject to be offered under the Islamic History and Civilization’s Unit. But we have not made the subject available and one of our main concerns is to find an appropriate civic framework to teach. Many questions are raised regarding it, one of them is “can other faiths being taught without bias” and “how to make sure our students’ faith is protected when learning about other faiths”.

To me, I have a strong feeling that by learning about other faiths, it will definitely strengthen our own faith and on top of that, we will also communicate with members of other faiths with the highest degree of confidence. But my argument is too abstract. I argued that Umar ibn al-Khattab r.a. said, “if a believer knows Islam but does not know jahiliyyah, his Islam will detach from him one by one” Another argument is based on historical perspective because I admire Abū Rayḥān al-Bīrūnī (973 – 1048) . He spent a very long period in India, lived with Hindus, remained Muslim faithfully and observed the Hindu culture, faith, philosophy and recorded them objectively without being judgmental. He laid the foundation of a strong anthropological social studies and even considered as the founder of Indology.

But to formulate a proper framework, I thank ITEP for exposing us to such a resourceful and relevant materials. Both books by Charles Haynes are now in my hand and I will continue to study them Insha-Allah. This gives us confident to launch the World Religions subject next semester and  probably, it will be the first attempt in our country, a school (and even an Islamic school) teaches its students about other faiths. We want to produce leaders and to lead our country, students must admit that our country is a multi racial and multi faith society. It is dangerous to let the students continuously live in a monotonous Islamic bubble, ignoring the reality.

The only thing is, we need to clearly balance and harmonize topics which are taught in Usul al-Din class, and topics which are taught in World Religions. I believe that Deen has two dimensions, one is habl min Allah and another one is habl min al-Nas. Habl min Allah deals with the connection between man and his Creator. It is theology and here, each religion is unique and exclusive. Habl min al-Nas deals with the connection between man and his surrounding. Here, all religions are promoting similar almost similar values. Golden rules, be kind with one another, respect human lives, family, neighborhood, caring for the environment etc.

Therefore, we should not mix between the two. The theological part contains many differences which make a faith is different from the others. Here, the process of learning must commit to instilling the Aqeedah, having the Yaqeen, and feeling gratitude to be blessed with the true guidance from Allah. Other believes will be touched and the error must be made clear. With akhlaq, being on the side of al-Haqq, we feel blessed and not towards grandiosity.

The social aspect of religion is where, interfaith dialogue can be made possible. Every member of different faith will explore what their and other’s faith say about certain topics. Here, similarities are promoted for better understanding, feeling safe and secure living next to ‘the others’.

Offering World Religions subject in our school is planned with the inclusion of visiting Churches, Hindu and Buddist Temple and to let the representatives of the faiths explain themselves about their belief and practice. What we need to do is to prepare our students to have the heart of learners and ears of Ulul Albaab:

Who listen to speech and follow the best of it. Those are the ones Allah has guided, and those are people of understanding.[Q39:18] 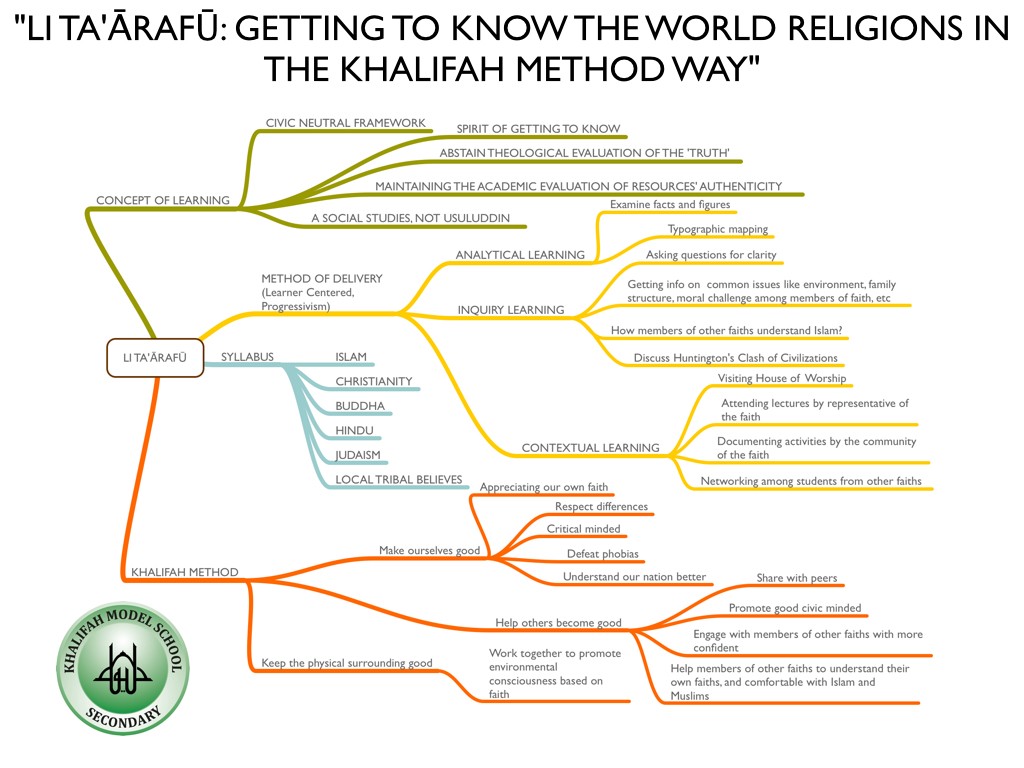 “LI TA’ĀRAFŪ: GETTING TO KNOW THE WORLD RELIGIONS IN THE KHALIFAH METHOD WAY”

We will continue to explore the materials ITEP provided and hopefully in the near future, World Religions subject will no longer be a taboo. Insha-Allah.